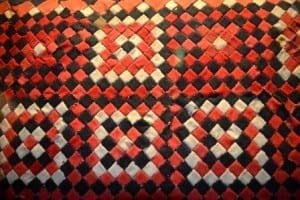 Militia quilts were made from military uniform fabrics of wool serge in regimental colours. They are also called uniform quilts, soldiers’ quilts or Crimean quilts. The militia quiltmajority of them were made between 1850 and 1900 throughout the British Empire.

This quilt was donated to the Museum’s collection in 1965 by Mrs. George Dobson of British Columbia. She stated that it was made by a soldier here 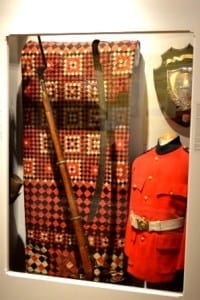 in Stratford in 1866 during the period of the Fenian Raids. It displays typical characteristics of militia quilts: small, regular geometric shapes, strong regimental colours – reds, blacks, creams and greys – a medallion format radiating from the centre and mosaic piecing of “military precision”. Whip-stitching or flat over-stitching with little if any seam allowance is also a common feature.

This militia quilt is presently on display in our Perth UP: A Retrospective of Duty and Valour exhibit.