Many people across Perth County have generously donated quilts to the Stratford Perth Museum to commemorate ancestors, family members, and neighbours, and to preserve records of preceding generations.

The Coddington Family Signature Quilt made in 1931 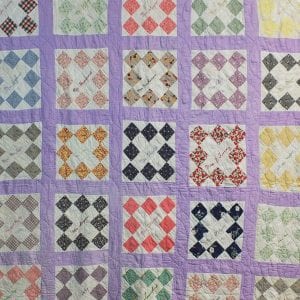 This quilt was started in Stratford in 1929 by the donor’s great grandmother Catherine McLeod. It was finished in 1931 at the Halfway House, a very popular hotel in its day located halfway between Stratford and St. Mary’s. Members of the Coddington family operated a general store and gas station near there until about 1935. The names embroidered on this quilt are Coddington relatives and neighbours who lived in Stratford and around the Halfway House location. The quilt itself is white cotton stitched in a double wedding ring pattern with a purple border. It is made up of 8 diamond shape appliques each varying in colour around the edges with names embroidered diagonally in the centre. More details and a photo can be found in Vol.1 of the Downie Township history ‘Memories of Downie.” Click here for the list of names embroidered on the quilt.

The Petrie-Robinson Family Signature Quilt made from 1906-1928 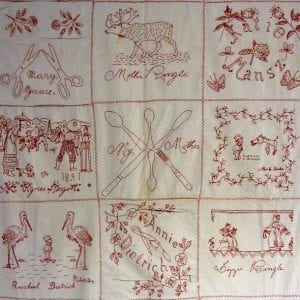 This quilt was made by Annie Dietrich Petrie, This quilt is white cotton with 30 panels  embroidered with flowers, birds, signatures and borders in red thread. It has no batting and could possibly be a bedspread. Its measurements are 198 cm  by 182 cm. The quilt was made by Annie Dietrich Petrie, who lived with her husband John, on the seventh concession in South Easthope township, now part of Perth East, with help from her neighbours. Annie and John were the parents of 6 daughters and it was the husband of their granddaughter Charlotte Robinson who donated the quilt to the Museum’s collection. A photo of Annie and John along with a close-up illustration of one of the quilt’s panel can be found in ‘ Country Roads: The Story of Southeast Hope, a history of the former township of Southeast Hope.’ Click here for the list of names embroidered on the quilt.

The Agnes Sweeton Popple Signature Quilt made in Atwood Ontario

It is likely that this quilt originated in Atwood where its original owner Agnes Sweeton Popple lived. It is possible that the quilt was given to Agnes by her Aunt Jenny Simpson Grey whose name as well as other relatives names can be found on the quilt. The quilt itself is white cotton comprising of 20 blocks on which 395 names embroidered with pink thread are arranged in a star and crescent pattern. The blocks are also trimmed with a pink fabric. Click here for the list of names embroidered on the quilt.

This quilt was made by family, church members, and friends of Martha Hood Falk, a nurse in Listowel. This quilt was given to her in 1929 as a gift upon her return to missionary work in Lagos, West Africa, where she served for 33 years. This quilt has 264 red and white blocks arranged in columnar fashion. There are 132 printed names stitched in red thread on white blocks. Click here for the list of names embroidered on the quilt.

The Pratt Family Signature Quilt made in Stratford, Ontario in 2000 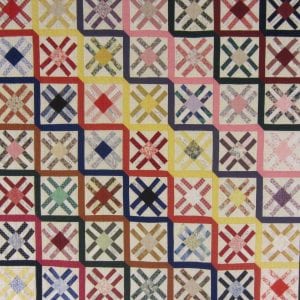 The names on this colourful, contemporary signature quilt are those of the descendants of Francis and Amelia (Pafford) Pratt who set sail from Liverpool, England in 1870 to start their new life in Canada. After a brief stay with relatives in Fullarton Township, Perth County, they settled in Stratford where they purchased several properties. Francis began a printing business on Market Square while Amelia operated their grocery store. Francis also served as a lay preacher and later acquired a farm property in North Easthope Township. Together they raised a family of nine sons and daughters.

The Pauline Morrison Signature Bedspread, on loan from the Morrison Family

In the early days of World War II, Kirkton, Woodham, and surrounding communities in the former Blanshard Township were active supporters of the Red Cross war effort. One of their fundraising projects was designing a bedspread on which, for a fee, members of the community could have their names inscribed with the finished product being auctioned off to the highest bidder. A local woman known for her needlework embroidered the names and complementary designs. The family of the auction winner ultimately gave it to a member of the Morrison family.