During World War One, voluntary groups in Perth County and across the country were actively supporting Canadian men and women who were on the front lines in Europe. Prominent among these were the Canadian Red Cross Society, the Imperial Order of the Daughters of the Empire (IODE) and the Women’s Patriotic Society (WPS.) These World War I Red Cross quilts are very distinct because they are made of multiple blocks containing red crosses and red signatures on a white background. Signature quilts were quickly identified as a popular means to raise funds to purchase supplies for the soldiers overseas or to help support wives and families at home who were left without their main financial support.

The IODE, founded in 1900, primarily to support Canadian efforts on behalf of the Britain and the Empire, focused particularly on the causes of education and charity. The Women’s Patriotic Societies organized activities to raise money that was donated to the Canadian Patriotic Fund which the government established to provide for the needs of soldier’s families. From 1914-1918 $379,245.00 was raised in Perth County for the Fund. 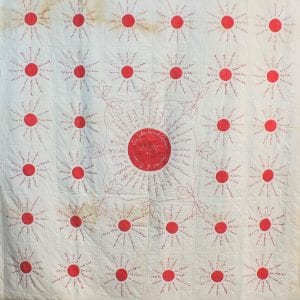 This quilt was made during World War I to raise money for the war effort and to honour local soldiers whose names are embroidered in the centre block. The quilt itself is white cotton with no batting. It is made of 38 blocks and 1 large centre block. Each of the 38 blocks has a 3” sun in the centre with 12 donor names embroidered as rays from the sun. It is 215 cm long and 124.5 cm wide. Click here for the list of names embroidered on the quilt. 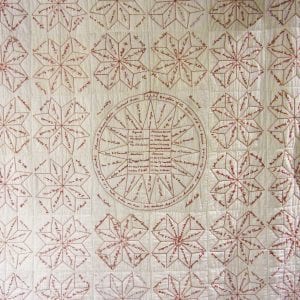 This quilt was made in 1915 by the members of the Thomas Delamere Chapter of the IODE, who were part of School Section #5 in the former Downie Township. The quilt was used as a raffle prize to raise money for the war effort. The quilt itself is made with white cotton. It has 487 names embroidered in 44 signature squares. These names are embroidered with red floss in a star shaped pattern. As well, the quilt has a large centre commemorative block continuing the star motif and featuring a small embroidered crown. It is 201 cm long and 171cm wide. Click here for the list of names embroidered on the quilt.

This quilt was also made in 1915 by the members of the Thomas G. Delamere Chapter of the IODE, who were part of School Section #5 in the former Downie Township. The quilt is made of white cotton and embroidered with red floss. It is decorated with 44 star shaped blocks which are embroidered with 499 names. The quilt itself is 120cm long and 170 cm wide.

Elma Township Signature Quilt made in 1927 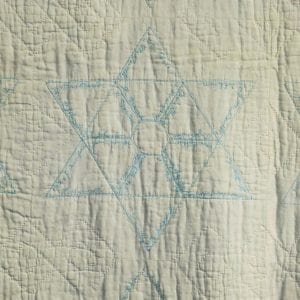 This quilt, which was possibly made by members of the Listowel West Women’s Institute, was a prize in a raffle in which donors paid 5-10 cents to have their names added to the quilt and a chance to win the draw. The daughter of the winner donated the quilt to the Museum’s collection and reported that it had been in her mother’s possession for 75 years. The quilt itself is made of white cotton with a blue border and blue embroidered signatures. The names, which are arranged in a 6-sided star shape across 18 blocks, appear to be the names of local residents of the former Elma Township. It is 202cm long and 160cm wide. Click here for the list of names embroidered on the quilt. 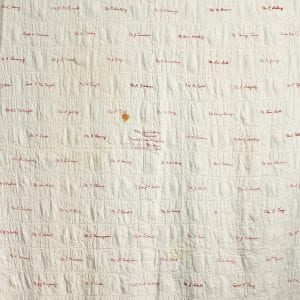 This quilt was made by the members of the Women’s Patriotic Society in the Monkton area. The name of the Society President, who was also the local postmaster, is embroidered into the centre of the quilt. The quilt also features the names of 87 World War I soldiers from the former Logan Township. When this quilt was part of a museum exhibit in 2012 several of the soldier’s relatives left relevant and often touching comments about their ancestors’ lives following their return from the war. Sadly there were some who lost their lives in the battles. The quilt itself is an off-white cotton quilt with thin batting. It was made between 1915 and 1919. Click here for the list of names embroidered on the quilt. 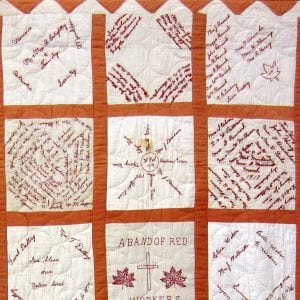 This quilt was made in 1919 by members of the Women’s Patriotic Society of Monkton to raise money for the Red Cross to help support the families of Perth County soldiers returning from serving in the war. The Women’s Patriotic Society of Monkton, which was organized in 1914, raised $7,700. The quilt itself is made of white cotton with orange trim. It has 30 blocks of names embroidered with red floss and arranged in a variety of patterns. Click here for the list of names embroidered on the quilt. Click here for a Monkton Times article from 1919.