These quilts were made by individual schools to honour a specific class of students, mark an anniversary or commemorate teachers, trustees and others connected with the school during its history.

Before large county school boards were established, the area surrounding a particular school was referred to as a section with its own board of trustees. Each section had a number, hence the name of the school was School Section # – or abbreviated as SS #.

Pioneers of SS #7 Mornington Township Signature Quilt made in  1955 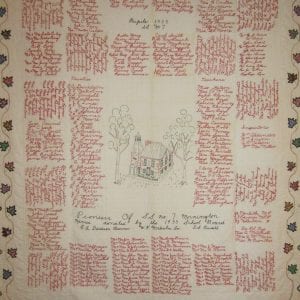 This signature quilt was made in 1955 by the students of SS #7 Mornington Township which was located in Carthage, Ontario and is now part of Perth East. The 375 names on the quilt include those of the trustees, teachers and inspectors connected with the school during its history as well as the pupils in 1955 who stitched the names. The local MP, MPP, the county warden, the school’s physician and the members of the 1955 School board paid for their names to be displayed on the quilt. The other names on the quilt likely include those of former students. The quilt itself is made of white cotton with a scalloped border decorated with coloured leaves. In the centre panel of the quilt is an embroidered two storey school building situated between two trees. Click here for a list of names embroidered on the quilt. 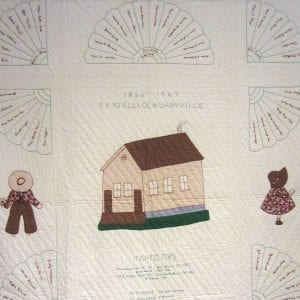 This quilt was made by the Kuhryville Women’s Institute in 1967, Canada’s Centennial Year, to commemorate the school’s 100th anniversary. The names of 52 former teachers, 5 inspectors, school nurses and county wardens are displayed in fan-shaped and block arrangements. This quilt was the prize for a draw during the July 1967 anniversary celebration. The holder of the winning ticket was the mother of the school’s last teacher. In 2011 that former teacher donated the quilt to the Museum’s collection. More details about SS #10 and other former Ellice Township schools can be found in “Echoes of Ellice.” the history of the former township which is now part of Perth East. The quilt itself is made of off-white cotton with appliques of the schoolhouse and the children in tan, dark brown, and green colours. It is 233 cm long and 191 cm wide. Click here for a list of names embroidered on the quilt. 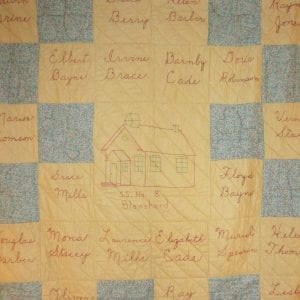 This quilt has been loaned to the Stratford Perth Museum along with a class photo from one of the former students of the Rannoch School whose name is embroidered on the quilt. The former Blanshard township is now part of Perth South. The quilt itself is a combination of blue and gold blocks with a dark red binding.  The names of the pupils and their teachers are embroidered with a dark red thread. A line-drawing of the schoolhouse occupies the 4 centre blocks. Click here for a list of names embroidered on the quilt.