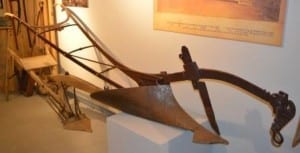 The Yeandle Plough was invented by blacksmith Thomas Yeandle in Stratford and received its patent for “a certain new and useful improvement in mould boards for ploughs,” as noted in the Commissioner of Patents Journal for July 9, 1872. The Reports of Commissioners to the British House of Commons commended Yeandle in its 1877 report for a “useful general purpose plough, well made saving of undue friction by a peculiar construction of underside and mould board; for steel sole of small ground surface; for peculiar form of landside allowing of considerable wear; (and) adjustable steel mould-board of good form.”

Our plough was used on the Reid farm near St. Marys. It is currently on display in our Can You Dig It? Perth County’s Agricultural Roots exhibit.