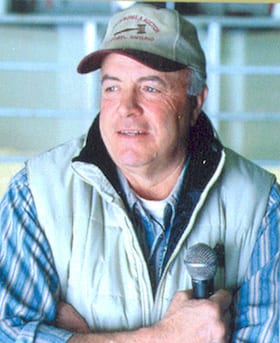 David Carson, from Listowel, began his agricultural operations in the 1960s and today has customers in every province in Canada as well as throughout the United States. He is a supplier of cattle to some of the largest dairy operations in the world but he is perhaps best known as a breeder of Clydesdales. Progeny from his farm can be found on the streets of Toronto and New York City in the service of those police departments, more famously among the Budweiser Cydesdales in such events as the Rose Bowl Parade. It was his contribution to his communities that also impressed the committee.
In 2005 he opened the doors of his operation to the public and hosted the International Plowing Match with over 97,000 visitors. He is a supporter of 4-H programs, the Listowel Agricultural Society, he volunteers and announces at many charity auctions and his company and staff were major contributors to the Listowel Hospital fundraising campaign. 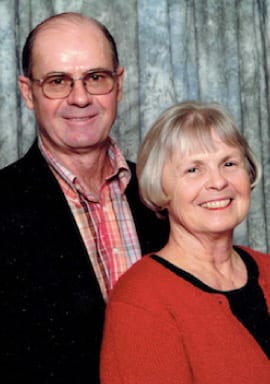 Mary and John McIntosh, from Perth South, both grew up on dairy farms in what was Downie Township and are still very proud to say they farm at Avonbank. Mary and John have a wealth of community involvement in rural, agricultural, and community organizations past and present. Both have been involved in Perth 4-H programs as members and leaders, as well as Junior Farmers, where John was Stratford Club President, Perth President and Director provincially. Mary served as President of Perth Children’s Aid Society and Perth County Federation of Agriculture, as well as Director to OFA. She also served as the Perth Environmental Farm Plan Coordinator, and also Downie Ward Councillor in Perth South. She currently chairs the Huron-Perth Presbytery of the London Conference for the United Church of Canada. John was chair of the Ontario Agriculture Hall of Fame Milton Museum, sat on the Perth County Dairy Producer Committee and is the current chair of the St. Marys Memorial Hospital Foundation. John has been Chair of different committees at three International Plowing Matches hosted in Perth County. The Downie Mutual Insurance Board and the Farm Mutual Reinsurance Board of Canada have benefitted from John’s leadership. He was also on the committee which changed Blanshard Municipal Telephone system and was a founding member of Quadro Communications. John and Mary were also the recipients of the 2015 Perth County Federation of Agriculture Recognition Award.