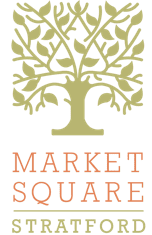 On Canada Day, 2017, a long red ribbon was cut and Stratford’s newly-renovated Market Square was officially open. That day, thousands of local residents and visitors flooded the Square, making the point that this open space behind our City Hall was meant to provide them with a place to gather, celebrate, play and relax.

For over a decade, various community volunteers sustained a dream that Market Square could be transformed for more public uses. Thanks to their work, encouragement from local residents and businesses, and the support of City Council, that dream finally came true.

STRATFORD, September 5, 2018 – With the goal of preserving the historical record, the Stratford Market Square Committee has relocated its entire website to the Stratford Perth Museum website.

After more than a decade of citizen advocacy, the Committee has also announced that its work is done. “Although our Committee has disbanded, the website remains a valuable tool for citizens and researchers,” says Committee chair, Eleanor Kane. “The story of Market Square is a fascinating one and the website captures so much information about the various stages of consultation, design and decision-making.”  The site also features a series of newspaper articles developed by local author, Marianne Brandis, that explores much of the Square’s history and the emerging global interest in public squares as a component of healthy community development.

The Committee’s contributions encompassed years of public consultations, an international design competition, public information and fundraising campaigns, and multiple presentations to City Council. The Committee’s goal was to encourage the conversion of an aging parking lot into a public square that would serve the City of Stratford and its citizens into the future. The revitalized Market Square was officially re-opened on Canada Day 2017.