The Stratford Perth Museum Agriculture Wall of Fame announced its 2018 inductees at the Stratford Rotary Club’s Rural-Urban night in April. 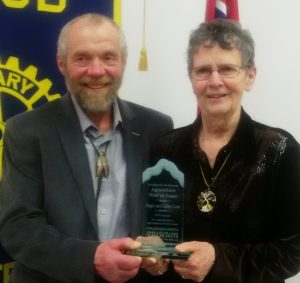 This is the fifth year for the Agriculture Wall of Fame, which recognizes contributions to agriculture in Perth County.
This year the Wall of Fame honoured a North Easthope couple, Roger and Elaine Cook. They bought the family farm in 1970 and were in the dairy industry for 27 years but their real love has always been as stewards of the land.
That came honestly as Roger’s parents restricted the access of livestock to the waterways on the farm and there was zero exposure to the spring fed stream on the property from both livestock and equipment.

The Cooks also developed many practices which helped to improve stream and ground water quality for humans as well as for fish and wildlife health and habitat. That included 100% retention of liquid and solid nutrient waste.
You cannot talk about the Cooks and their contributions to Perth County without praising their initiatives regarding trees and woodlots.

Roger has also helped with the Stratford and District Agricultural Society, the Mitchell Pioneer Club and area plowing matches with sawmill and cross cut displays.The Cooks bought, moved and restored the Amulree circular sawmill to the farm and have made it available to friends and neighbours for the making of such things as toys, canoe paddles and tools.

It’s hard to imagine that they have any time for hobbies but they enjoy canoeing, hiking, curling, pickleball, lawn bowling and square dancing.

The Wall of Fame is open to current or former residents of Perth County who have made outstanding contributions to agriculture in Perth County.
Nominations are solicited from the public and a committee determines the honourees.