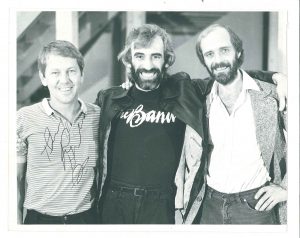 From left to right: Ken Kalmusky, Richard Manuel, John Till.

In the late 1950’s Rock and Roll hit the music scene in Canada.

In Stratford it was the inspiration for a group of boys to form their own band, The Rebels. Later known as The Revols, it launched the careers of three young musicians who went on to play with some of the famous bands in the world.
Richard Manuel, John Till and Ken Kalmusky honed their skills performing with rockabilly legend Ronnie Hawkins, and many other Canadian and American artists.

Richard Manuel went on to become one of the founding members of The Band. John Till was an original member of the Full Tilt Boogie Band, Janis Joplin’s band. Ken Kalmusky founded Great Speckled Bird, the band that backed Canadian musicians Ian and Sylvia.

This year the famous 1969 Woodstock Music and Art Festival celebrates its 50th anniversary. Till and Manuel performed at the pivotal event in music history.

Created in conjunction with the artists’ families, this exhibit celebrates the careers of these three musicians, and includes background stories and rare personal memorabilia. It also highlights some of the influences that are part of Perth County’s rich music history. Features include a look back at the Dance Halls of the 1930s, ’40s and ’50s, as well as a view of Stratford in the ‘60s through the lens of the Perth County Conspiracy (Does Not Exist).

The exhibit, which is made possible by generous support from Strickland’s and opens June 21.

This exhibit in cooperation with the Stratford Blues & Ribfest which also has a Woodstock theme in 2019. The Blues and Ribfest also opens Friday June 21 with the headline act Inspired by Janis, a Janis Joplin tribute band. On Saturday’ June 22 The Last Waltz is the theme with a musical celebration of The Band and on the closing day, Sunday June 23 it’s The Woodstock Experience.

For information about the Stratford Blues and Ribfest go to www.stratfordbluesandribfest.ca