Culture Cab back for Lights On Stratford! 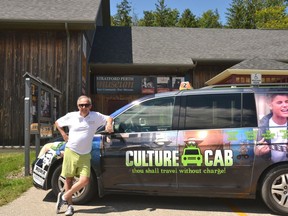 Culture Cab – a program that offers free cab rides at the point of service for people interested in a trip to one of the city’s cultural hotspots – will be back in operation next week, tourism officials have announced.Instead of theatres, however, Culture Cab will this time be focused on getting people to the colourful displays of the Lights on Stratford festival instead.

Paired with the free-to-use Stratford Transit shuttle bus that will be ready to roll at the same time, organizers believe the two options will make it exceptionally convenient to enjoy the six-week-long winter attraction opening Friday.

“We’re really trying to be creative about how we facilitate and uncork cultural opportunities both for local residents and visitors,” said Zac Gribble, the executive director of Destination Stratford. “Programs like Culture Cab and … the free hop-on, hop-off shuttle bus are extremely innovative. They are starting to get noticed.”

Culture Cab was originally spearheaded by the Stratford Perth Museum in partnership with the Stratford Festival, Stratford Summer Music, Destination Stratford and the city’s taxi companies.

But the plan to more conveniently connect people to the museum and Stratford’s theatres this past year turned out to be “a huge success,” he said. So much so that the project’s funders – the Federal Economic Development Agency for Southern Ontario – agreed to help relaunch Culture Cab for the duration of Lights on Stratford this winter.

“It’s really good for the museum … but at the same time I think it’s a great tourism initiative, too,” said Kastner, adding that funding for the program has been accessible in large part because it benefits visitors from across Southwestern Ontario and the Greater Toronto Area.“The GO train service – it really complements that as well. I just think there’s a lot of benefits to it. The cab companies have been absolutely great to work with.”

Hailing a Culture Cab will work the same way as it did earlier this year – simply call one of the participating cab companies listed on culturecab.ca when the website relaunches Dec. 16.

Now entering its third year, the Lights on Stratford festival was created during the pandemic to entice visitors back to the city when its theatre company was not in season.

With the exception of a display launching Dec. 19 at Tom Patterson Theatre, all of this year’s installations will light up on Friday, Dec. 16, Gribble said. That includes The Pool, a large-scale interactive public art display by artist Jen Lewin that will be set up in Market Square next to city hall.“We’re just incredibly proud of what we’ve been able to accomplish,” Gribble said. “It’s really expanded. We couldn’t be more proud of our community and we wanted to make sure we said as much out loud at the opening.”